When is the last time you considered your handwriting? I suspect some time during late primary or early secondary school before it became a subconscious act. But writing suddenly stopped being subconsious for me as I had a handwriting crisis with the letter f. All of a sudden I didn’t like how wrote the letter and felt awkward every time I wrote one. I researched different ways to write f and practised writing them on scraps of paper to find a style I like.

But then I discovered I was over thinking how to write f and it had become difficult to write. Just look at these attempts from my diary, I gave up on the first and started the word again, and in the second you can see I’ve written the letter at least twice and ended up a shape that doesn’t even look like an f.

I’ve now settled into a new method of writing the letter f which is different to my previous writing. In the image below my original f is above the caption and my new style the left hand picture below the caption below. However, I don’t love the new style because I think it looks angular compared to the rest of my handwriting which is curvy, for example many m, n, h and k curve below the line and under the following letter and my g and y tend to curve under the preceding letter. However, it feels more comfortable to write and writing has become a subconscious act again, so I’m feeling happier.

I don’t know what triggered this handwriting crisis, but I’m hoping I’m not going to have it with the rest of the letters in the alphabet. I already know I don’t particularly like the way I write q and z but as I don’t use them as much as the other letters I haven’t had the desire to research alternative methods, yet!

Have you noticed your hardwriting changing? Have you tried to change your handwriting and how did you go about it?

Read moreQuiet: The Power of Introverts in a World That Can't Stop Talking - Susan Cain Review 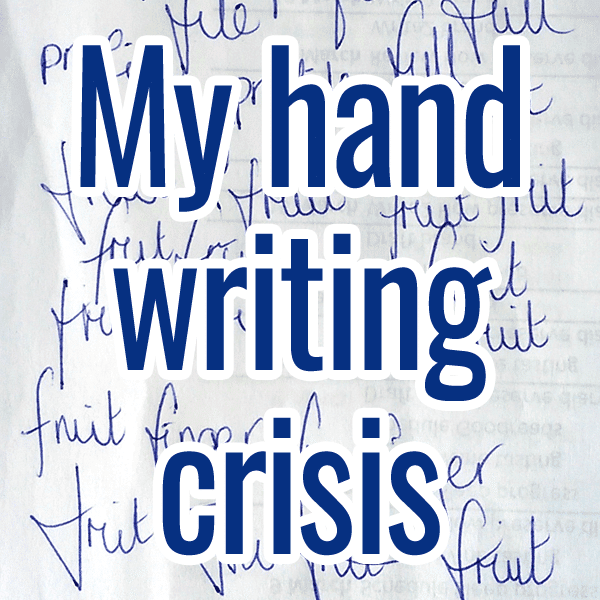 Discovering if running is for me #OneBigFatRun
Next Post: Having the right tool for the job

Lol Kate. I cannot believe you’ve thought so much about your writing! Tbh, mine just gets written…badly. I think it’s legible (having seen and had to decipher some horrendous writing over the years), but others have said it’s hard. I think it’s just written fast without care, because there’s no need for it now I rarely handwrite. But I’ve never thought about how I write, it’s just there – and being a leftie it’s all over the place as well.

I know. I wrote the post because I couldn’t believe how long I was thinking about my writing and the funny thing is I think my writing has changed since I wrote this post! I have different styles depending whether it is everyday or whether it is meant to be neat!