Spring has finally happened in the UK and the forecast for the long weekend was sunny and warm, so we were all off to Dorset with my in-laws. Unfortunately our plans dramatically changed with me taking my husband to eye casualty twice instead.

During the week, ED developed swelling across the bridge of his nose which spread below his eyes and across his cheeks. When a fever developed he went to see the local doctor who almost sent him straight to hospital to go on an antibiotic drip. Instead he decided on strong oral antibiotics and a check up the following day, Friday. The swelling stopped spreading and the fever had disappeared, but the doctor was still not happy as the swelling was so close to the eyes and told ED to go to Eye Casualty department at the local hospital on Saturday for a consultant to assess whether any scans or further treatment were required.

So change of plan. It would be no fun for two young children to be waiting at the hospital, particularly a four year old girl who was excited about going to the beach. Luckily for us, my mother in law offered to look after the children and tried out our Saturday routine while we went to the hospital.

After a two hour wait and a prescription for additional antibiotics we were on our way home; with the knowledge we had to return again the next morning. Kindly my mother in law offered to take the children with her to Dorset so we didn’t need to worry about them if ED’s temperature increased again and we had to rush to get him admitted to the ward. Fortunately that didn’t happen and the Sunday check up confirmed the antibiotics were working and no more check ups for five days.

So the weekend didn’t go as planned, but there have been positives, in addition to ED starting to get better:

I hope you enjoyed your weekend and it went more to plan than ours? Did you enjoy the weather? 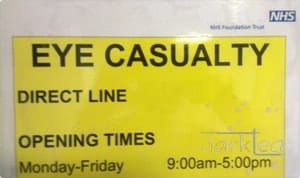 Read moreWhat is your writing legacy?