Back on my bike – Team Honk Relay

Starting is often the hardest part of any activity and Team Honk created the right combination of factors to get me cycling again; a big challenge, raising money for charity and a group of amazing people working together. So on Friday I got back on my bike to help carry the baton between Reading and Oxford as part of the Team Honk relay between Lands End and John O’Groats. The relay route zig zags across the UK covering about 3,000 miles between 38 regional teams using a variety of methods including feet, bicycles, scooters, horses and boats, and aims to raise £20,000 for Sport Relief (although the indications are the total is going to be significantly higher than).

I’d intend to sign up when the relay was first announced but a combination of nerves (hey, I only vaguely knew these people as names on Twitter) and lack of productivity meant I missed out on the planning. However, when I discovered the route was going close to my home and the Reading team were looking for help to get the baton to Oxford I couldn’t resist.

I used to do a lot of cycling; in an off road, carrying a tent, holiday way. But I wasn’t confident to offer a large number of miles; as the dust shows it has been over five years since I’ve been on my bike. However, Sport Relief is about getting involved, getting active and raising money so with three days notice I was confirmed to cover the three miles between Dorchester-on-Thames and Nuneham Courtney.

We’d planned for rain. The river levels had already impacted on the plans to row along the Thames and even walking along the tow path between Shiplake College (who raised an amazing £300) and Henley-on-Thames was not possible, but the team adapted. I was lucky because despite a flood warning for Dorchester-on-Thames I had amazing weather both dry and sunny. I collected the baton from Polly and Carrie (look at me making a great first impression wearing my husband’s trisuit and daughter’s Rapunzel wig). At Nuneham Courtenay I passed the baton on to Haj who cycled it into Oxford; and don’t they all look like proper cyclists.

My cycle was actually easier than I expected and I was looking forward to the cycle back and not just because it was downhill. But disaster struck. As I set off I discovered I had a puncture because of a little stone, and no repair kit because I’d travelled as light as possible. I had the choice of walking back with the bike or waiting in the near by garden centre to be picked up and I chose the easy option – hmm lovely cake.

You can read more from the Reading team here The #TeamHonkRelay hits Reading…, Silence is golden and Honking uphill… and please don’t forget to sponsor us.

Read moreMemories of my mum

The relay is continuing for another month and I’m enjoying supporting the other participants through Twitter. I’m also looking forward to continuing with cycling now I’ve started again, particularly as my husband bought me a new saddle the following day, and from the four miles I cycled yesterday I can say it is much more comfortable.

If I’m going to continue with cycling I suspect I’d benefit from a refresh of gear because what I have is over ten years old and possibly closer to fifteen (you can’t tell but I’m wearing a pair of tights under the trisuit). What do you recommend? Plus do you have any tips to help me get out on my bike?

I’ve contributed a small amount to the Team Honk Relay, but I’m hoping by getting me back on my bike the Team Honk Relay will make a large contribution to me. If you want to make a contribution there are lots of methods. Firstly you can sponsor Reading Team Honk. Secondly you can join in the Team Honk relay, look at the route details and contact the relevant regional Facebook group. Thirdly you can join in the first ever Sainsbury’s Sport Relief Games that take place from Friday 21st to Sunday 23rd March 2014. The public can join the fun and games by running, swimming or cycling their way to raising cash at over a thousand venues around the country, including the landmark events at Queen Elizabeth Olympic Park.

As one of the biggest fundraising events, Sport Relief brings the entire nation together to get active raise cash and change lives. The money raised by the public is spent by Comic Relief to help transform the lives of some of the poorest and most disadvantaged people both at home in the UK and across the world. 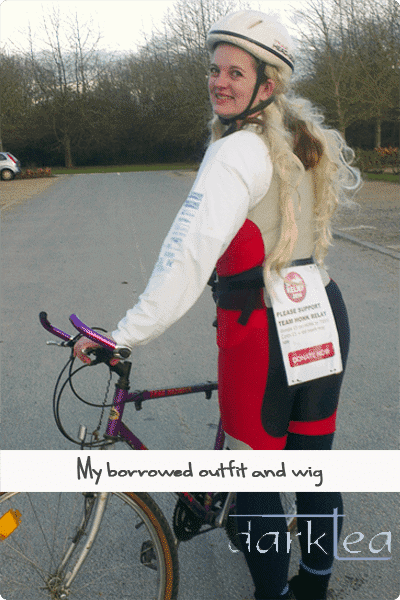 Definitely. Have you noticed how nice that cake looks? A three tier Victoria sponge with cream and jam, yum yum.

Hello. What a great way to get back into cycling. The Team Hon Relay was a lot of fun – and a great way to meet other local bloggers too (although everyone should wear a name badge methinks…). I’m glad you mentioned you were wearing a wig, I thought it was real!! Maybe we will get a chance to meet up at BritMums Live this year?

If that was my real hair I think I would have cut it off by now, but it was great to find something to wear at short notice. I’ve enjoyed the Facebook group and it is always good to meet other local bloggers, and it would be even better in person (BritMums Live sounds so exciting).

That wig really suits you! Thank you SO much for getting involved and back on the saddle (and thank goodness for the more comfy looking on!) You all did so well – especially considering that the weather has hardly been our friend!
The money raised does such good things – so once again a huge thank you and much love x

Thank you for visiting and organising the relay Mammasaurus. Although I only did a small part I’m loving following Mr B around the country, seeing the creativity of the other participants and watching the total raised increasing.

I was blond a few years ago, and several years before that I was a natural blond!

I love that despite not knowing people you still signed up. Friendship is the one thing that is coming out of this that hadnt thought about. And I love it. Thank you so much for getting involved.

Thank you for leading the way and badgering us through the Facebook group. Although I did my part individually (apart from Haj the protector / outrider) I feel developing friendships for the other participants even though I haven’t met them in person (yet). It seems very silly now that I didn’t put my hand up earlier.