I recently tried my first Big Mac. Yes really, I’m going to be 40 soon and I’ve never had a Big Mac. In fact, I had to ask people to explain what a Big Mac was!

My first McDonald’s memory was getting a burger on holiday in America, when I was about 3. I remember enjoying it, until I got to the gherkin! I wasn’t willing to eat them after that so the arrival of McNuggets was very exciting. Growing up my parents wouldn’t take me to McDonald’s instead we went to the Merrie England (a coffee shop chain in West Yorkshire). I occasionally went to McDonald’s with friends but didn’t get into the habit. I guess the last time I went was while I was at university, at least 15 years ago.

I was invited* to make my own Big Mac at the refurbished McDonald’s at Milton Heights, Oxfordshire. I thought it would be a good experience for me; you know keep in touch with the youth!

It was fun going into the kitchen (and getting my own kit). I was surprised at how small it was. Plus how efficient they are, completing orders in about 70 seconds. And making my own Big Mac meant I could make it exactly how I wanted it, which meant ketchup, bacon and no onions or salad. Apparently, it was so different it was not actually a Big Mac, but I call it a Big Mac Kate style. Fortunately, in the new McDonald’s personalisation of burgers is encouraged as all burgers are made to order instead of being pre made, packaged and waiting for your order. On the new touch screen kiosks you can only remove items from burgers so if you want a Big Mac Kate style I think you’ll have to ask nicely at the counter!

My verdict on the Big Mac is it was okay. I enjoyed eating it because I was hungry, but I would rather choose McNuggets. However, I was very impressed with the new Signature burgers. The Signature burgers use a brioche bun and a thicker burger (it takes over 5 minutes to cook instead of 42 seconds for a normal burger). I had a BBQ Signature burger (obviously personalised) and really enjoyed it. In fact, I enjoyed it so much I will consider going back to McDonald’s for more. And it is likely now I know there is a 24 hour McDonald’s on one of the main roads near our house, and they’ll be selling Signature burgers soon; very very tempting.

Disclosure: this is a collaborative post and all words and thoughts are my own. 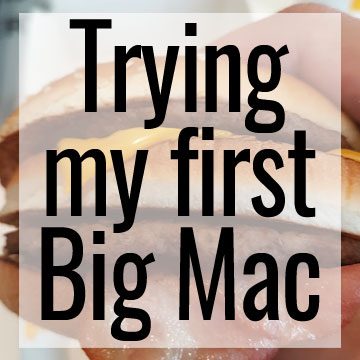 Creating our study space
Next Post: Tomorrow I am going to start a new regime – journal extract 28th March 1992

I only had a McDonalds the other day on holidays – we couldn’t fit all of us into the swimming pool cafe, so Maccy D’s was the next option. I’m a quarterpounder with cheese girl – haven’t had a big mac for years, although taking out the salad? There’s not much in there in the first place! The signature burgers did look good but the touch screens took a lot of time to work out where the things were I wanted. It’s great to be able to take out the gherkins though (well, for N’s at least, I didn’t get the option to remove them from mine unless I missed that one).

I’ve never had a quarterpounder either. I felt completely out of touch when we were discussing the menu changes as I had no idea what was on there in the first place. I have to admit I didn’t try the kiosk myself as I ordered my signature burger from the counter, but it looked very straight forward.