Is it time to stop writing this blog?

As often happens at the start of the new year I’m thinking about my commitments and what I want to achieve during the next twelve months; one activity that has been frequently on my mind is this blog. I’m approaching my fourth anniversary, but starting to question whether I should continue.

There is nothing great about my posting trend; in fact if the trend continues I will be writing a negative number of posts this year. Even taking into account that several of my posts in 2007 and 2008 were copies of book reviews I’d previously written or journal extracts, there is still a definite decline which, perhaps not surprisingly,  started about the time I announced my pregnancy in 2008.

Read moreBlog stats review - what is the point of them?

Interestingly though, the visitors to my site are starting to increase, despite this reduction in new posts. I haven’t discovered the reason for this yet, but maybe my site is improving its search engine ranking or perhaps it is all down to the interest in labelling keyboard keys (my most popular posts).

The downside of the decline in my posts is the reduction in comments as I always found it exciting to get comments and learnt a lot from what people wrote. Comments have continued to trickle in but, I suspect many of the ones over the last year are actually cleverly disguised spam. Of course, it is not surprising that the number of comments closely follows the number of published posts, but if I want more comments, is it as easy as just writing more posts? Or has it been too long and the people who used to comment regularly have found different blogs to read? And if I had more comments would that encourage me to write more often?

I had two revelations about why I wasn’t writing blog posts a year ago, and I think one of these is still valid. I love processes and they help me complete activities efficiently, but I have very few for writing blog posts. In fact, I have only one; reviewing the statistics each month to create a list of ideas for possible future posts, meaning I have a long list of unwritten posts.

The actual writing is not much of a problem, instead it is adding it to the site and adding pictures that takes me a long time. For instance, the images in this posts are copied from Excel, saved as jpg from PowerPoint, cropped externally and then uploaded and added to the post. I assume there is a much quicker method that would provide better quality images.

Is there a solution to this without getting caught up in ‘blogging’ again? I don’t know, but I worry if I spend time researching other people’s blogging methodologies I will allow myself to be distracted by reading about other aspects of blogging.

Conclusions – Is it time to stop writing this blog?

I would prefer to make a decision to stop writing this blog instead of letting it dwindle out through inactivity. Although I would feel less ‘guilt’ if I decided to stop now, I’m just not ready to let go. I like having a blog, writing post, thinking of ideas and communicating with people. So, if I’m enjoying writing does it matter if my posting schedule is varied and erratic? I know it is not ‘good blogging’, but if it is something I enjoy doing do I need to follow the rules other people suggest?

Over the next six months, I intend to compare the enjoyment and guilt I feel in association with this blog and maybe then I will be ready to make a decision one way or other.

Additional posts on this topic

Read moreWhat do you want to read on this blog?

How to know when to stop blogging

Ten reasons why I should stop blogging

Should I stop blogging? 20 questions to ask yourself 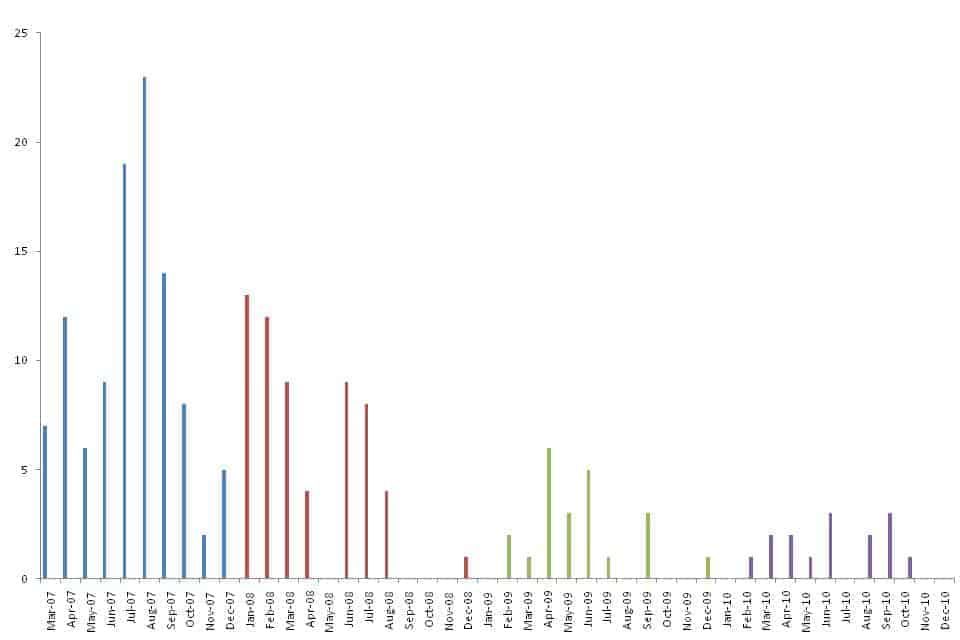 Can blogging replace journalling?
Next Post: Writing a novel in a year (or shorter)

Tweets that mention Is it time to stop writing this blog? -- Topsy.com

[…] This post was mentioned on Twitter by How To Do Stuff, Kate Davis. Kate Davis said: Is it time for me to stop writing my blog? https://darktea.co.uk/darktea/blog/is-it-time-to-stop-writing-this-blog […]

I have enjoyed reading your blogs and missed them once you reigned in as the baby approached. I appreciate the site and would benefit from reading your thoughts in the future. Having just had a new baby myself (day 20th) I can appreciate how priorities change.

Perhaps you can think of a new way of writing your blogs? I have noted that some sites I like are actually rather focussed and concise in what they impart. Your blogs tend to be more informative and less stream of consciousness and therefore probably more educative and harder work.

Thank you for your kind words, and congratulations on your new arrival. My daughter is now two years old, but she still absorbs a good proportion of my time, for instance she is sat next to me at the moment encouraging me to read a book to her.

You are right that I need to find a new way of writing my blog. I have a good method of developing ideas for posts, but I haven’t got the process of writing posts sorted; if I can do that and set aside some time regularly I think I’d be surprised at how many posts I could produce.