Since February, we’ve been in our house for five years, and the last year has been a busy one with noticeable changes.

The biggest change has been in the area where my husband (and kids) knocked down the walls last year. My father in law and husband built new walls to create a study, utility room and shower room. They have also tiled the hall, shower room and utility room and fitted the shower toilet and sink. Huge progress that looks amazing.

Read moreRemoving the 'sluttery' in our home

For our daughter’s 9th birthday she got her own bedroom. This is something she has wanted for a few years, but we’ve resisted as we know they’ll need to share when the bigger work is done on the house, but the time was right. Her new room includes new Ikea furniture and a sofa bed for sleepovers. We still have some work to do in here, such as removing the plumbing from the sink, but I have to admit that I feel jealous every time I walk into her room as she has three Ikea Pax wardrobes compared to my one wobbly clothes rail.

A small, but very useful change is having a shower screen in the family bathroom. It has been tricky to keep water in the bath without a screen, so now people can choose to have a shower instead of a bath (even if it isn’t the most luxury of experience).

There are still many things we haven’t done; and you’ll recognise most of them from my previous anniversary posts. We haven’t:

Our focus at the moment is finishing the downstairs shower room, utility room and study. Once the new study is complete, the children can use the current study as a playroom (temporarily at least as the door and some of the walls will need moving once the lift is removed). I’m looking forward to this moment as it will make our lounge much much tidier.

Removing the lift will be the next major activity. This will involve builders as it requires several steel beams to support the roof. We’re still working on the specification so haven’t been in touch with builders to know their availability. I don’t expect this work to start this year, but it will be great if it does and if it doesn’t, maybe this will be a year when we focus on smaller changes.

Do you have plans for your house this year? What would you love to do to your house? 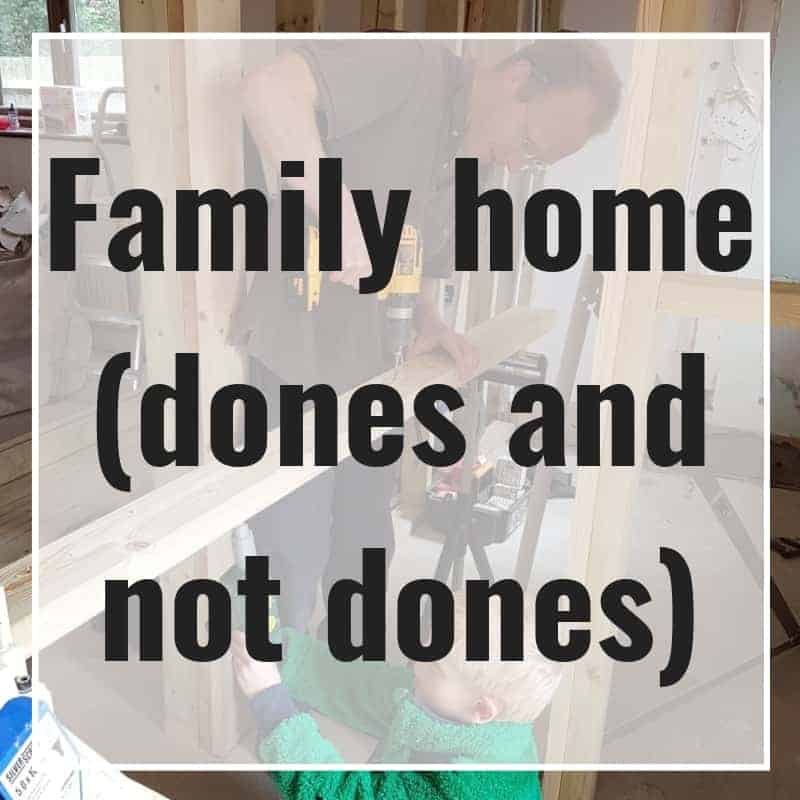 We completely renovated our home last year. We moved out completely 11 months ago and stayed in a rental for two months while our kitchen was completely demolished and rebuilt with beautiful new countertops and custom cupboards, new floors throughout, new electrical wiring, new windows throughout, new doors inside and outside, new lighting throughout, new crown and base molding throughout, a new roof, and new paint inside and out. In a miraculous turn, our contractor finished on time and on budget! Now we are faced with redoing the front and back landscaping but haven’t yet accomplished that task.