How we get out of the house in the morning

Three mornings a week we aim to have all four of us out of the house as close to 7:20 as we can. But we like to maximise our sleep time (by hitting the snooze button a few times). We got tired of battling and nagging the children to get ready quickly, so we now use a secret weapon – a teasmade. Yes a teasmade, just like your parents or grandparents had when you were young.

What is a teasmade?

A teasmade is a devise in the bedroom designed to make tea when you first wake up. According to Wikipedia they started becoming popular in the 1930s and started to decline in 1970s; although I remember my parents in the early 1980s. They generally work by having an alarm clock which starts to heat water when the alarm time is reached which is collected in a teapot once it is boiling.

Read moreKeeping on top of repeating tasks at home

I bought ours as a gift for my husband several years ago, although it was really a present for myself; when I was on maternity leave with our eldest I went downstairs and made a cup of tea for my husband every day, but was not keen to do this when I was on leave with our second, so decided to make tea in the bedroom instead. We have a Breville WakeCup (although it appears to have been discontinued) which works slightly differently as the heated water comes out of two spouts and can go directly into two cups instead of a teapot, this means you can make two different drinks. It also has a button to start it instead of setting an alarm (this is what we use).

How it helps us get out of the house

We get the children’s clothes out the night before and once they’re dressed they get their cup of milk and we turn Cbeebies on while they drink it – the quicker they get dressed the more television they are able to watch and the more milk they can drink (they have breakfast at nursery and breakfast club on these days). So basically, bribery works with our children, and the only pain for us is the occasional Postman Pat episode.

What are your morning’s like? How do you encourage your children to get ready? 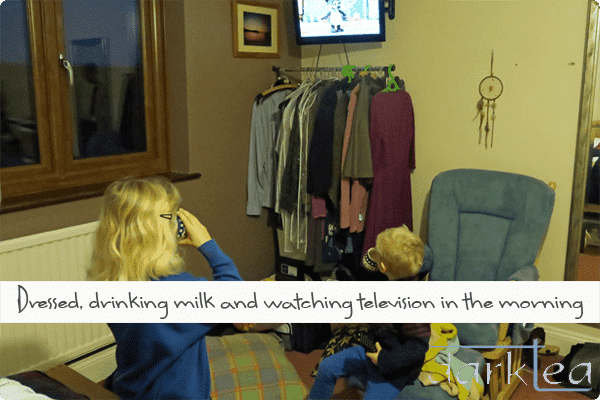 What if I do it wrong?
Next Post: BlogCamp UK – Blogging, Vlogging and Photography

ha ha what a random coincidence! Did you know i don’t drink tea though?! blurgh. Makes me a proper outcast!
p.s thanks for the mention x

Ha ha, can you believe I don’t drink tea either! Or coffee, the closest I get is green tea. I understand about the outcast thing I used to go to meetings when the only thing on offer was tea or coffee so I got into the habit of drinking hot water. That is why we needed a teasmade that can make two different drinks, I just have hot water.

I don’t drink tea or coffee either. Bleurgh. It does seem like the teasmade has had a resurgence recently!

I wish N would just have a drink before nursery. He eats there 3 days a week when he gets dropped off at 8, but because he wakes so early he wants a good breakfast before going…if I don’t get it, he makes hi own.

We don’t give the children a choice in the mornings, Emma we hurry them out of the house too quickly. In fact they didn’t used to get anything before leaving the house, but felt it was unfair that we had drinks and they didn’t. We hope the milk gives them enough to last until they get to breakfast club and nursery. It does make breakfast on the other days much more exciting.