But which are the weeds?

The wonderful thing about planting seeds is it leads to things growing. Having planted flower seeds in June we’ve got lots of flowers growing; however we’ve also got things growing in places we didn’t plant any seeds. I’ve assumed either weeds or the return of the lemon balm I spent ages digging out.

Since planting the seeds B and I have been watching for signs of green growth in the raised flower bed we’d emptied in June. It was exciting to see the first shoots and then the first flowers. Once they’d grown a little higher I knew there were some weeds growing because shoots were showing around the sunflowers and past the marker I’d placed to show where we’d planted (I’d intended to get more seeds to fill the rest of the bed).

I knew it would be easier to remove the weeds while they were small, but I faced the problem many new gardeners have to deal with; which shoots are the weeds?

Read moreSuccess even if I didn't finish the cleaning process

My strategy was to wait until the plants had grown tall enough to flower, and after our  summer holiday we found the flowers and weeds had both grown significantly.

Out came the gloves and gardening forks, both big and small, and we started to remove the weeds at one end of the raised bed. Both children had a go at weeding, but soon decided their strengths were in different areas and delegated the weeding to me. B liked to arrange the removed weeds into two piles, hers and mine, making sure they were even so it appeared we’d removed the same number. M had a go at helping Daddy removing weeds from the lawn, and took control of the wheelbarrow; sometimes collecting the weeds, but mainly just pushing it around the patio.

After a few hours, they were both bored of gardening, but still wanted to be where the actions was so they brought their toys outside. This included their chairs and a box of books. After some time reading, B moved on to a role play game involving the central raised bed as a bus and all the children needing a book.

Read moreHow to deal with your neighbour's trees

After a day’s work, and the input of the two children, the flowers can be seen. I’m not convinced I’ve identified and removed all the weeds but I’m pleased with the progress; even though I haven’t found any of the poppies or marigolds we planted.

I’m also pleased with how much the children enjoy being in the garden and have taken an interest in what we’ve found. B was very pleased with the number of ladybirds she found, but less impressed with the bees on her flowers. The children were given a flower kit at our housewarming party last week so hopefully that is the incentive we need to be back planting seeds in Spring next year. 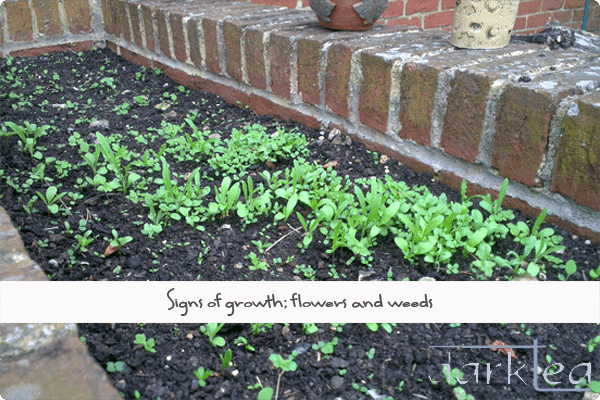