While the kids are away …

We are fortunate to have great support from my in-laws and they frequently help out with childcare during the school holidays. When the kids are away it gives us the opportunity to have calmer days, as well as:

However, over the recent holiday we decided to take it up a level and managed to fit lots more in. In fact it feels like we went a bit wild!

On Monday we went to the Hammersmith Apollo to see Evanescence*. This was my first concert for over 20 years since seeing REM in Huddersfield, 1995.

Read moreStudland beach - a beach with something for everyone

I’ve liked Evanescence since 2003 when they released My Immortal. When this was played on TV I remember the presenter warning this did not represent the rest of the album! Well I loved that album, Fallen*, and bought the following three, so it was great to see them live, with an orchestra. Amy Lee was amazing, both singing and on the piano. You can watch some of my favourite moments in this video.

Ready Player One at the Cinema

On Wednesday, we fitted in a trip to the cinema to see Ready Player One. I knew very little about the film before we went, but really enjoyed it. In fact, I’m already looking forward to seeing it again when it’s released on DVD.

We have the choice of two cineams, one near where each of us works. One has good food options and the other has great seats. For this visit, we went to the one with great seats. This meant our dinner consisted of fried chicken, chips, sweets and popcorn during the film. Classy and healthy!

I feel we’ve got stuck in a rut with the meals we’ve been cooking over the last few months; particularly as I’m reducing my diary intake which restricts some of our usuals. So instead of eating our usual “while the kids are away cheese sauce heavy” meal. I suggested trying some new meals.

We tried two meals from Chinese food in minutes*. Because quick is always a bonus. Both meals were successful, but I preferred the first meal Pork with chinese leaf. Although we made it with baby sweetcorn and mangetout meaning it looks a lot like the Juicy chilli chicken and cashew nuts. But trust me they tasted different.

Normally we wouldn’t consider visiting friends with kids while our kids are away. It seems a bit mean to both sets of children. However, on Saturday we had the opportunity to visit friends we haven’t seen in a while. And it was great to have an adult catch up (which involved a lot of games talk and my first go at Sagrada*).

The Dead Daisies in Bristol

Later that night, we went to 02 Academy in Bristol to see The Dead Daisies* (supported by The Amorettes* and The Treatment*). This was an interesting contrast to Monday’s concert as the venue and music style were very different. Plus I didn’t know any of the bands so didn’t have the music familiarity I did with Evanescence. However, it was still a very enjoyable evening, having a drink, or two, and watching live music with lots of other people. I’d forgotten what it is like to walk on a sticky floor, although it is not something I’ve missed!

I have to admit I felt tired for most of the week. But it was worth it because I enjoyed the excitement and variety and I’ll definitely remember this week when the kids were away. I’m now very tempted to book in more events, and build up some anticipation for the next time the kids are away. The big question is who would I like to see and what would I like to do.

*Disclosure: this post includes affiliate links. This means if you buy something after following the link I will earn some money but you will not be charged anything extra. We’ve paid for all the activities and all thoughts are my own. 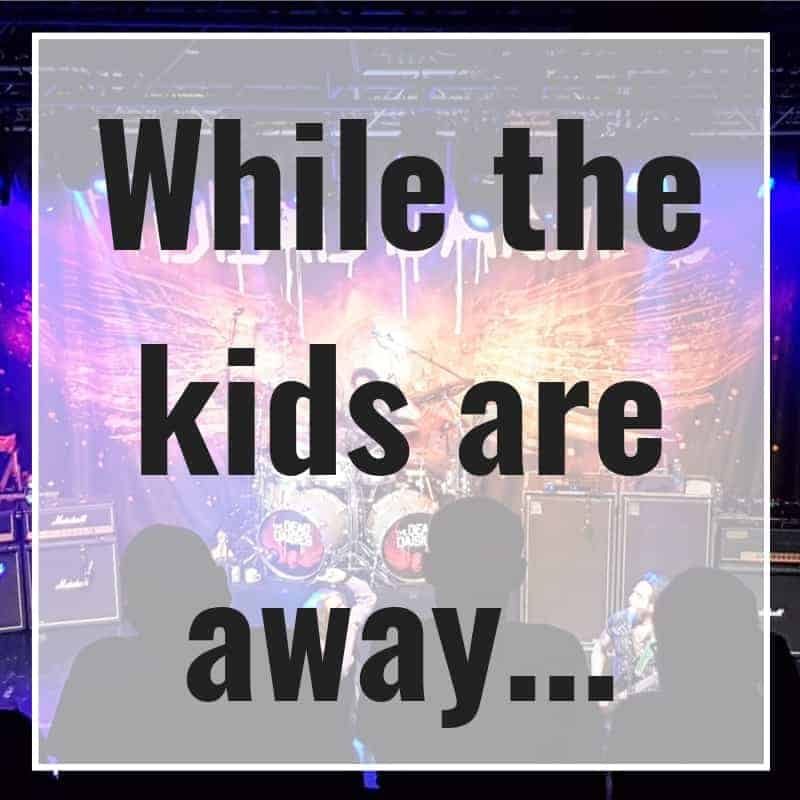