The power of finding your keystone habit

March was a disappointment for me as I wrote just one blog post, so I’ve been thinking why, what happened? And I’ve realised it comes down to one thing – habit interruption, specifically my keystone habit.

What are keystone habits?

The keystone is the centre stone in a bridge arch, and holds all the other arch stones in place, even with no mortar. The same thing can happen with habits, with one habit holding the others together. It isn’t necessarily connected to the others but the process of completing the keystone habit makes it easier to complete other habits. This is how I think about them, but of course, I’m not the first person to compare habits to bridges.

Read moreAsk advice: How do you use contexts?

The most well-known use of the term is in The Power of Habits by Charles Duhigg*, one of the books in my to be read pile.

Some habits… matter more than others in remaking businesses and lives. These are #keystone habits”, and they can influence how people work, eat, play, live, spend and communicate. Keystone habits start a process that, over time, transforms everything.

Duhigg says instead of focussing on all the habits you want to change, focus on a few key ones and this starts a process that changes your other habits.

The Power of Habits* currently only has one vote in my poll of which book should I read next, but having flicked through it for this post I’m very intrigued and I’m tempted to give it some votes to lift it up the order!

Another place I’ve across the concept is Flylady who recommends keeping your kitchen sink clean every day to act as a reminder of what you can achieve and so your dirty items can be washed up straight away preventing a build up of things on the side.

I first noticed the effect about ten years ago when I realised I was much more effective at doing the things I wanted when I wrote my journal. I don’t know if my journal writing was the actual keystone habit, or whether it was encouraged as a result of another habit, but I noticed the connection because when I felt I’d lost control I’d also stopped writing my journal (I didn’t write every day at the time). It’s sad that I only noticed the connection when I felt out of control and never when things were improving, but maybe this connection inspired me to start writing every day.

I’ve realised recently I have a new keystone habit. Sleep. And I know this has a significant impact on my other habits. So when I got more sleep, I’d wake up earlier and be able to work on my morning routine including morning pages. I also had more energy so was more focused and more motivated.

More sleep is a habit I’ve been wanting to improve for a long time, in fact, it was my one goal last year. Unfortunately, my improvements were undone when my daughter was sick during the night. It has not been easy to reinstate my sleep habit. Its taken three weeks but I’m almost back to where I was before the sickness, in fact in I’m starting to extend beyond my previous habits, with the very recent introduction of reading affirmations and exercise.

Finding your keystone habits will make it easier for you to make a significant change in your life because you’ll know which habits you should concentrate on the most. However it may not be easy to learn which habits are keystone ones for you, here are my suggestions:

Do you have a keystone habit? How did you identify it? What has it helped you achieve?

*Disclosure – this post includes affiliate links which means if you purchase something after following a link I will earn a percentage of the value, but it will not cost you anything extra. 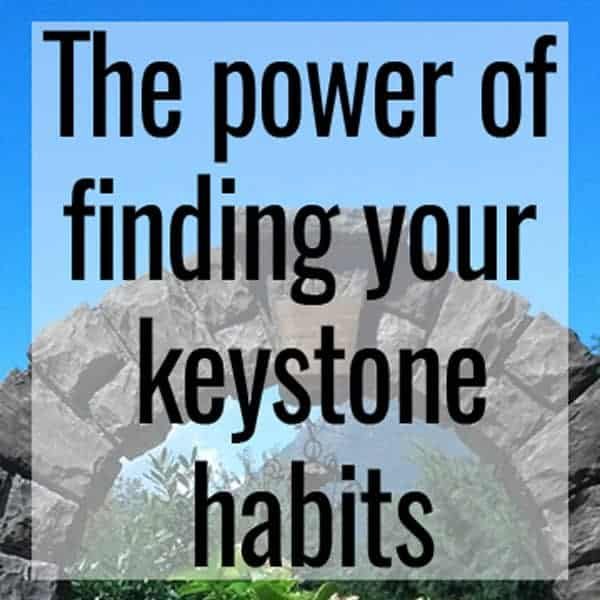 10 things I’ve learnt during 10 years of blogging
Next Post: Quiet: The Power of Introverts in a World That Can’t Stop Talking – Susan Cain Review