Positive thinking; does it leave a realistic record?

The positive thinker sees the invisible, feels the intangible, and achieves the impossible.

I’ve read repeatedly to use positive thinking to help achieve my goals and it is something I’ve consciously tried to do for many years after being given a copy of You can heal your life as a teenager; after almost twenty years I am much more aware of my words and thoughts.

“Your mind is a tool you can choose to use any way you wish.”- Louise L Hay

I’m hoping to encourage my three year old daughter to think positively. I always try and ask her to do something rather than not do something e.g. I ask her to walk at the swimming pool instead of not running (this is not always easy). Frequently when she is in bed I will ask her what she has enjoyed about the day, hoping she goes to sleep with happy thoughts.

I liked this method of closing the day so much that I’ve started keeping a positivity journal (expanding on writing a list of  things I’m grateful for or were good about the day that I occasionally did in my main journal). I’m using a 5 year journal which only has six lines each day so I need to focus on identifying the real highlights of the day, but it is quick to write and I don’t resist it like my main journal. As it is a 5 year journal, it is nice that in future years as well as capturing new positive thoughts, I will be able to review previous years, hopefully establishing a virtuous circle with my thoughts and attitude getting more and more positive.

Is a positive journal a realistic record?

The other day my daughter had a huge tantrum and my son was screaming because he has started to teeth. Obviously neither of these are included in my positives journal, but they are not recorded in my main journal either because I don’t write it daily (perhaps I should call the positive journal my main one as I’ve written it everyday in 2012). So I wonder if I’m leaving myself a completely rose tinted record of my children, and if I write about these ‘less positive’ events does it undo my development through the positives journal? I guess I will only start learning the answer to these questions when I write the second year of my positives journal.

How do you encourage positive thoughts? Has it made a difference to your goals? Do you see a clash between positive thinking and recording reality? 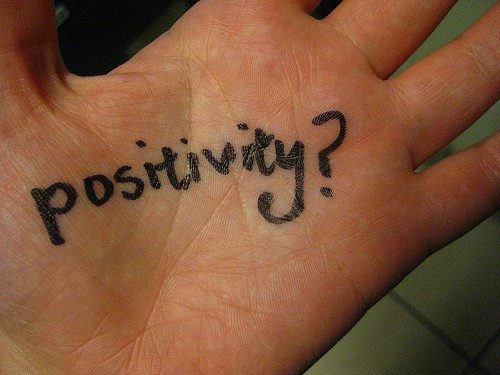 Reasons why it is important to complete your tasks
Next Post: Finding the time to write…how? »
Subscribe
Login

First, I think what you’re trying to do is admirable. However, I think as children we learn from both encouragement and from discipline. And discipline is more confusing sometimes when framed in positive terms. What not to do provides a helpful framework of rules. A kid can then rebel from some of those rules, and explore on his own while able to return to that structure of rules.

On a personal note my mother was so often positive that I only just recently found out that she used to bicker all the time with her father. It would have been reassuring for me to know that while I was bickering with my own dad. I think the positive-only approach risks the following as well: you may wind up praising a kid for even trivial accomplishments. If you really believe in the kid, then press him to do more. If he gets a C, you can praise him for getting a C (after all, it could have been a D or an F). But if you do so, does it send a message that you don’t believe he can and should get an A? I think kids want to be pushed to some degree (within reason), and that when they are pushed they often thank their parents later. Discipline helps to provide focus, and tough goals help to provide meaning and a sense of moving forward on the way to adulthood.

I also wonder whether sometimes a positive approach is actually in some ways easier for the parents than for the kids. It’s not always fun to discipline, but I think it’s necessary in order to set boundaries. I do believe that overall more positive than negative is a great idea — it’s a wonderful world to explore and it can be presented as such. But too much positivity too early leaves little positivity left to find on one’s own. (A kid can get sick of all the sunshine and even rebel against it — you see it all the time.)

Speaking of a wonderful world, Louis Armstrong thought it was — as an adult. But he had a very tough childhood. You don’t want to get jaded to happiness too early. I think that teaching possibility, perhaps, is what’s most important, as opposed to teaching positivity. If you truly believe in a kid’s ability to accomplish what he sets out to accomplish, then you can help him take the steps necessary to get where he needs to go. You can’t make him think positively, and trying too hard to do so might create a backlash or two I think. And I think if being positive means leaving out too many truths about the world, then the price for it is too high. Be honest, but tactful, I think. My mother for instance gave me such a skewed version of reality that she gave me less relevant information about the world than she might have. I simply had to discard the bulk of it later.

I think one of the other pitfalls of positive thinking is it can make a problem harder for us to see clearly. Sometimes a positive thinker can leave out unpleasant truths that have to be faced in order to solve a problem. For instance, if a positive thinker sees his kid as perfect, he might blame the kid’s teacher for issues that actually originated with the kid himself. If you leave out the facts you don’t like, you may be left to solve a problem using only some of the data available. And that goes on too long, as well, a fear of negativity could even develop. Some habitually positive thinkers go so far that they try to sweep all negativity under the rug.

Not everything in the world is pleasant, to be sure, but I think true peace of mind comes from acceptance of what is, and striving for balance. If I’m a habitually negative thinker, then I think adding positive thinking is especially useful. But if I’m a habitually positive thinker already, then adding more of it may give me an excuse to filter out a wider swath of reality. Reality is not so bad, and to some degree to solve real problems we must face as much of reality as possible.

These are only my thoughts. I am not currently a parent and I know that parenting is a lot harder than it looks (and it doesn’t look easy). The blog has given me a few things to think about here and you hit on an interesting topic.

Thank you for your long comment, it was very interesting to read.

You are absolutely right that it is not suitable to be positive all the time. However, I do try to be positive about the behaviour I want to see, for instance one day when at the swimming pool with friends and our children were running, I told mine to walk and she did, while my friend told her daughter to stop running, and she started to skip! If I don’t get the desired behaviour then it is important to use discipline; it can be tough, but I believe that by instilling it from an early age it is easier in the long run. On the day you wrote your comment, my daughter had been playing up and she’d had several timeouts and I’d needed to ignore a few tantrums before she did as I asked (get dressed and put away toys so we can go out).

From writimg my positive journal I’ve learnt that although I use positive language frequently, I tend to qualify what has happened; something great happened, but … It appears that especially I do this when I’m thinking about what I’ve achieved. Hopefully by encouraging my daughter to think about the positives it will develop into stronger self belief than mine.