I have a thing about landing windows; basically I think a landing should have a window. This is possibly because I grew up in a house with a large window that I loved sitting by watching the road outside, or maybe because our first house had such a small landing there was barely room for the doors let alone a window. In fact a window on the landing was on my list of requirements in our new house.

I don’t think I’ve mentioned before that we are working on a second major house renovation project. This house belonged to my grandfather in law and it is an extended family project, with my husband’s parents and Aunt and Uncle working on it. So this project has six people involved in every decision from adding a new external door to bathroom tiles.

One decision I had a very strong opinion about was adding a window to the landing when we extended into the roof. Okay, it is a small window and not one you can look through, but it does mean there is natural light on the landing, and frankly it looks great in the roof above the staircase.

Read moreBut which are the weeds?

Now the six of us have to agree what blind to put on the window. My only experience of VELUX blinds are black out ones which I think would be too severe for a landing, however I’ve discovered there are many different types, and I like the idea of roman blinds which I think will provide a much softer look to the window. The problem is it is manually operated and we’re going to need a very long pole; I can almost picture a comedy scene of someone balancing on the stairs waving an enormous stick at a small window. So unless we can agree on one that is electronically controlled I think we will continue with no blind.

Do you like windows on landings or does it not bother you? When you moved house did you have anything very specific you had to have in your new house?

Read moreUsing a process to help me clean the house

Disclosure: This is a collaborative post, but all views are my own; although I admit the staircase no longer looks like the above picture as the walls have now been plastered! 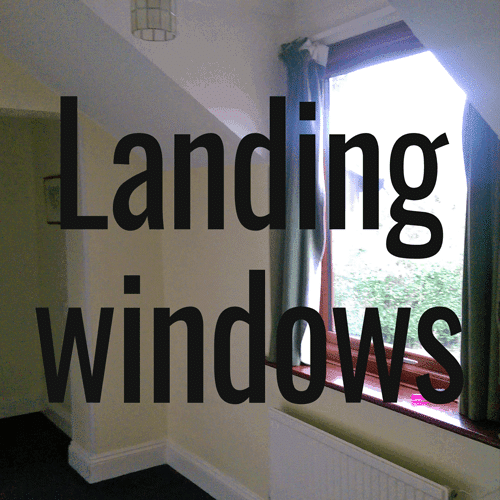