Keeping on top of repeating tasks at home

Repeating tasks are the key to achievement; either by making sure things run smoothly or by encouraging the little and often approach to completion.

It is over five years since I had the revelation of keeping my repeating tasks separate to my other tasks. Since then I’ve tried a variety of approaches, the most successful being a tickler file in Evernote. It was great being able to access it anywhere on any device.

That was until we moved house and we had no internet for two months. All of a sudden I couldn’t sync and each device had a different list so I started carrying my list on paper.

I’ve gone back to Evernote for my main task list (using Mark Forster’s Final Version method if you are interested), and I’ve bought a small (very cheap) week-to-view diary specifically for my repeating tasks, and after five weeks I’m finding it very successful.

What is a repeating task

I have many different repeating tasks, chores such as vacuuming; things that happen on a regular basis such as reading magazine subscriptions, downloading photographs from my camera; and tasks that help me achieve my resolutions such as writing blog posts, scrap page layouts. Obviously some are more enjoyable than others, but each repeat moves me closer to where I want to be.

My method is very simple. But I’ve learnt the hardest part is the correct mental approach; many times I’ve thought because a repeating task is on my list it would happen all on its own! I’m now being much stricter with myself to spend at least a few minutes on each task, because it is the only way I will get change (I know, obvious really). I’m also looking at my list in weekly chunks so I don’t worry if I don’t work on all the tasks each day, but I aim to work on all of them within the week.

Read moreHow we get out of the house in the morning

This is a small list compared to what I previously had in Evernote; that list was so long it was not possible for me to keep up to date and was not motivating to see a screen of tasks I should have completed. I declared a backlog on my tasks and I’m now working towards a list where there is a good chance I’ll complete it within the week. This means I don’t have all my repeating tasks included yet and explains why the list looks a bit strange, for example I’m dusting but not vacuuming! But I’m getting quicker with the tasks and gradually including more.

And yes, I need to have Pinterest as a repeating task, otherwise I’d be on there every day!

How do you deal with repeating tasks? Do you prefer to use a paper or electronic method? 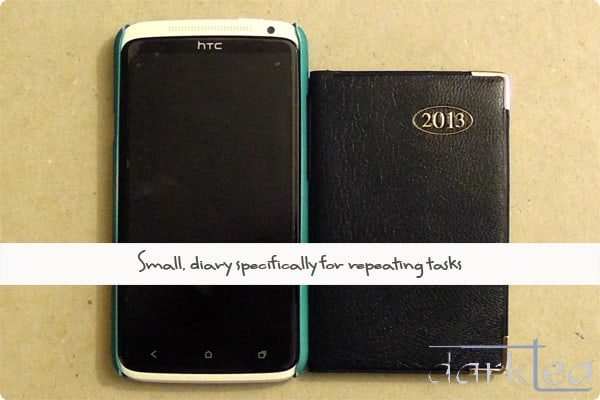 Kitchen dining room or lounge dining room?
Next Post: Learning the art of shopping for jeans