Recently it has become increasingly clear of the importance of my goal to have multiple sources of income including passive income as my main income stream maybe threatened.

I’ve been tracking the sources and level of my income since the beginning of April 2009 and the results are interesting, and slightly scary.

In the last 12 months I’ve had 5 sources of income:

This is slightly more than I estimated in April 2009 when I suggested my sources of income were salary (maternity pay), interest and from my blog. You will notice that blog is not on my list as I am waiting to receive my next payment.

What concerns me is that over 90% is coming from my job. In the last year I received statutory maternity pay or no pay for several months and the salary I’ve received is lower than normal, therefore in a normal year my reliance on my salary would be even higher.

This is not reassuring if there are possibly threats to my job.

Splitting these sources into passive and active you can see that that majority of the income is active, from my salary (my maternity pay was passive, but I’m counting it as active as it was a substitute for my salary), so I need to focus on identifying passive sources.

It has been a very varied year for income, due to my reliance on my salary and its variations while I’ve been on maternity leave. In future, I would like to be able to smooth out this variability. However, it is nice to know that my income in March 2010 was about 3 times higher than in April 2009.

Obviously, I’ve still got a lot of work to meet my goal to have multiple sources of income including passive income and it is something I’m going to focus on over the next few months.

I am open to inspiration though, so how have you developed your income streams?

P.S. I currently use [amazon ASIN=”B0002WV7TO”]MS Money[/amazon] to track my transactions and run reports, however it is not going to be developed in future. Do you have any recommendations for alternative software? 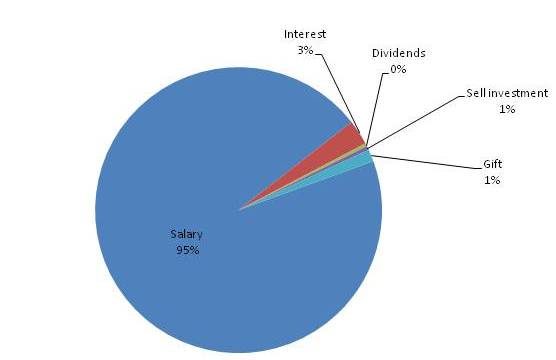 Dealing with short term urgent tasks
Next Post: Sitting in one of my favourite places…

Not sure if I am being blind or not however i see advertisements on your site but no mention of income derived from them in your pie chart.