28 Shares
I’ve spent most of the last two weeks finding and deleting duplicate files. A rather tedious task and one that worries me as I think I may delete a non duplicate file by mistake. I have to admit this isn’t the first time I’ve worked on removing my duplicate files, but it has recently become a priority because:

Where do duplicate files come from?

In my experience duplicates appear through a combination of laziness, and not having a consistent way of doing a task, for example, you downloaded a file and then downloaded it again a month later because it was easier than finding the previous one, or you transferred photographs from your camera to your computer, but left them on the camera so transferred them again with your newer photos.

The biggest culprit for me resulted from an external hard drive failure. I was able to recover some files through recovery software, then someone suggested connecting it to a different laptop and I managed to recover about 80% of the drive but with some overlap with the recovery software. I’ve also worked on a few projects which have involved shared dropbox folders that are downloaded to my laptop and often contain copies of photos I have filed elsewhere in my photo folder.

My priority has been to reduce the files on my laptop, although the duplicate files have often been on different devices:

Software to find and delete duplicates

It is not easy to find files that are potential duplicates and then to confirm whether they are actually identical versions, so I’ve been trying out different free software to help make the process easier. These are the ones I found most useful:

Read moreCan I be organised on my own?

This is my favourite software, although it is more of an app as it doesn’t install any files on to your computer and can be run from a USB stick. You select the folders you want to search and then it lists all the duplicate files showing where they are stored. Although it is a simple text display you can open the files or the storage folder to see more details on the files. You tick the files you want to delete and they are removed from your computer (they don’t go into the recycle bin, so if you don’t feel brave enough copy them to a different folder instead of deleting).

As you can guess from the name this software is about finding duplicate pictures. I haven’t found it as easy to delete duplicates as Doublekiller, but it is very handy when you are looking at images with different names or dimensions as you can easily compare them to select which ones you want to keep. You can also choose to compare pictures that are identical or ones that are similar which may help you reduce the number of files when you’ve taken several trying to get the perfect shot.

This software doesn’t find duplicates, instead it scans your hard drive and shows you which are the largest folders. I used this to prioritise which folders I should search for duplicates; this meant I wasn’t waiting for the other software to search my whole hard drive before I started deleting duplicate files.

After three weeks I’ve cleared 70Gb of files from my laptop, and reduced the space I was using on dropbox below my account limit so good progress. However, I’m a little embarassed to say I still have a lot of duplicate files remaining, including the hardest to compare those on my laptop and the desktop computer. To solve this I’ve installed Doublekiller and dropbox on the desktop computer meaning I can compare the dropbox directory (which is identical to the folder on my laptop) against the photograph folders on the desktop computer. I feel I have several weeks (or months) of duplicate removal ahead of me.
How do you deal with preventing duplicate files or deleting them once you’ve found them?

Disclosure: This post contains affiliate links which means I earn some money (or space from dropbox) if you purchase something after using my links, however it does not cost you anything extra 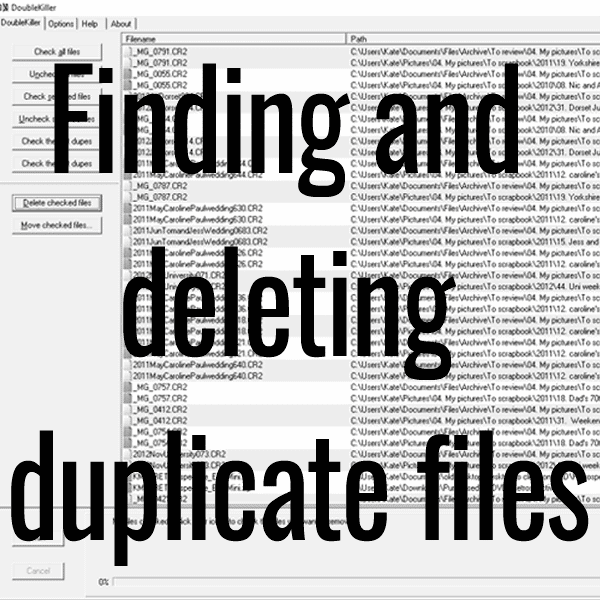 Wine tasting with Three Wine Men
Next Post: Reader survey results – what you want to read