Our favourite board games of 2018

We love playing board games. And we enjoy playing as a family and with friends, at home and out and about. It has been an interesting year for us as we’ve visited a local board games cafe, Thirsty Meeples and the UK Games Expo for the first time. I’ve also been taking part in the 10×10 challenge, with the aim to play ten games on ten different days, which has given me an extra focus on the number and type of games I’ve played.

Our favourite board games

We each listed our top five board games * of the year and I’m very pleased there is enough overlap that I’ve been able to create a top five for the family. Interestingly, each game had two votes so they are not all loved by all members (especially as Scrawl is 17+ game).

I’m intrigued that none of these games appeared on last year’s list. However, as we got four of them this year, it will be interesting to see if their novelty lasts into 2019.

Azul is a tile drafting game to create patterns with different coloured tiles. I loved this the first time I played it, and not just because I won, because since then I’ve been beaten every time. My daughter particularly is very good at making good choices while drafting to get high scoring patterns.

We played Drop It at UK Games Expo and were then lucky enough to be sent a copy. You drop different coloured and shaped pieces into the frame to earn points. However, there are a number of challenges due to restrictions such as not touching another piece of the same colour and the pieces frequently don’t land where you expect.

Rummikub is a game we’ve had for a number of years, however my son has learnt the rules this year and likes number patterns so has asked to play it a lot. The game has similar rules to the Rummy card game where you create sets or runs of tiles, with the aim to get rid of your tiles first.

I got a copy of Scrawl in a blogging conference goody bag and I absolutely love playing it. Although as it is not child friendly I haven’t played it as much as I’d have liked! Everyone starts with a saying which they draw for the next person to write a description of the drawing, which the next persons draws and so on until it ends up back with the original person. Think Chinese Whispers / Telephone game but using drawing and writing instead of whispering.

We were introduced to Sushi Go on a weekend away with our university friends, and have since got our own copy. It is a quick and cute card drafting game meaning you chose a card to keep from the cards in your hand, and then pass the cards to the next person. At the same time you take the desk of cards you are being passed from the person on the other side of you, and choose a card to keep, and then pass on the ones left. This continues until all the cards are used. Then you count up your score based on the different rules for each food group (it is easier to play than this may sound).

The votes broken down by person

Here are the favourite games by each person. Again these are in alphabetical order as it is too difficult to select a favourite, let alone list five in order of preference.

It is worth noting I think B was heavily influenced by a recent gaming weekend with friends as we only owned two of these games. However, she got Sushi Go for Christmas and plays Potion Explosion on her tablet whenever she gets the chance.

Do you play board games as a family? What are your favourites? Which would you recommend we try? What games do you plan to buy in 2019?

*Disclosure – I was given some of these board games free. This post also includes affiliate links which means if you buy something after following a link I will earn a percentage of the sale but it will not cost you more. These games are genuine choices by me and my family. 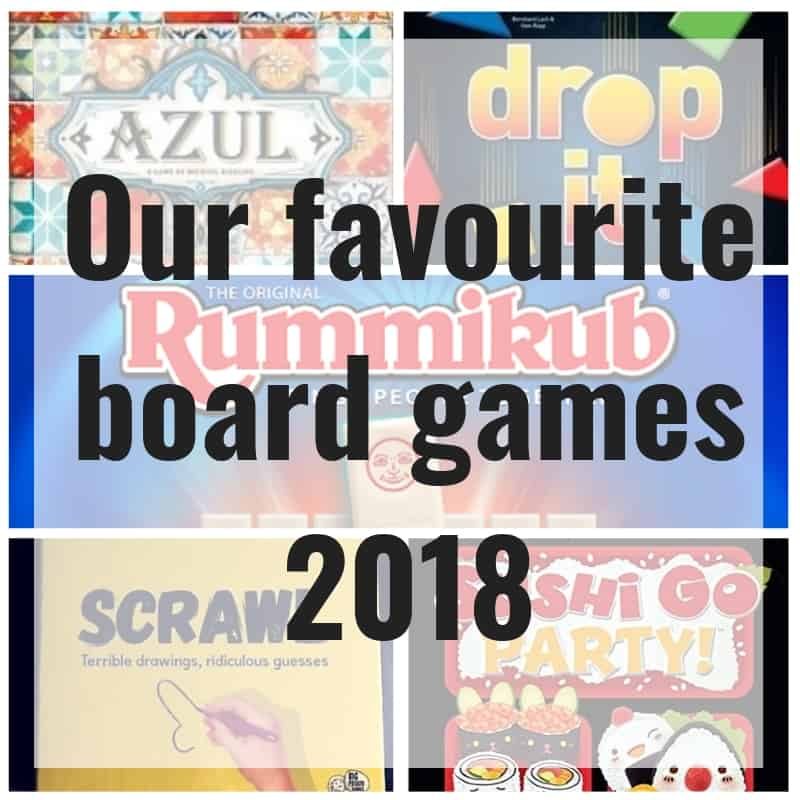 I loved rummikub when we played last Christmas. I’d not come across it before so hoping to get it for N and I to play.

I has been around for decades, but I didn’t hear of it until a few years ago until someone mentioned their daughter loved playing it. I don’t know how it took so long to discover it.