There was no reason for other people to take photographs of me last month, so I did something different and specifically asked my husband to take them of events I wanted captured. These are the only pictures of me from March, but it is a big step forward for me that I requested (possibly demanded) they were taken.

The first was me wearing the new cycling gear he’d bought to keep me motivated in going out on the bike and the second was with B before we watched a local amateur dramatics performance of The Wizard of Oz. The third occasion was when the children gave me their Mothering Sunday cards and gifts (when I still had wet hair you’ll notice), and as there are several pictures I’ve been able to pick my favourites rather than making do with the one that exists.

I’ve been thinking about taking photographs of myself in future, although the idea of it feels very awkward to me. We don’t have a full length mirror and most of our surfaces are at the wrong height, so I’m planning on buying a small tripod, although I’ve already procrastinated for several weeks. How do you feel about taking selfies?

From the comments you’ve left on my previous Hidden me posts, and from reading this fascinating post Lessons Learned from a Year of Staying in the Picture I’ve realised this is an issue wider than just me, and it is not just about Mums. In most households  it appears there is one person who is the main photographer and consequently they don’t appear in pictures very often. I find this sad, and I think it is important that everyone is captured for memories; when my Mum died we discovered the most recent photograph of her with both my sister and me was over 15 years earlier. That is something we can’t go back and change.

I think we should be encouraging more pictures to be taken of these ‘hidden’ people. What do you think? 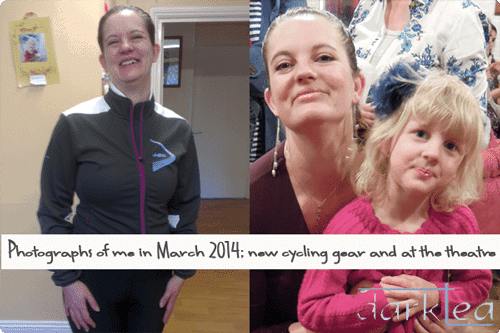 What I learnt at Blogcamp [including video]
Next Post: Goodreads #30

there and back again... a mother's tale

A group of friends and I commit to having a photo taken during a special moment with our tots once a month, its spurred my husband into offering to be the photographer more and I’m feeling more relaxed in front of the camera too!

Author
Kate Darktea(@kate-darktea)
Reply to  there and back again... a mother's tale

That is a great idea to have a monthly picture and I’m sure you’re right that you get more comfortable the more you are in pictures.

Thank you Hannah. Although my husband often has a camera with him on holiday he is too busy taking pictures of landscapes to take them of me!

Great photos and images of Mother’s Day when children are little are so special. I totally get your point but I hate having my photo taken.

I’m working through not liking having my picture taken because I’ve decided it is more important to be in some of them. And as ‘there and back again’ said earlier the more you do it the more comfortable you get – I’m hoping this is true.

I started taking lots of photos of me a few years back and like to get professional family ones with the kids.

You never know what might happen in life and I always want the kids to have lots of photos and memories of their Mum. x

We had some studio pictures taken when B was a baby, but we didn’t do it for M because we couldn’t tie the photographer down. We take an annual family photograph using the camera on the timer, but haven’t thought of using a professional. I agree with you, I want to make sure they can look back and see pictures of me (next I may have to tackle being in the videos).

I’m always the one to take the photographs in our house so am rarely in any of them. It’s very tricking taking a selfie and I always feel awkward! Apparently the trick is to take it from a height and take hundreds so you can delete the awful ones! These photos of you are great – so important to capture the special/fun moments 🙂

Thank you Suzanne. I agree with the awkwardness of selfies, but maybe it is something I need to work through, although when I get the tripod I will just need to work with the timer setting.

Lovely photos x I also take most of the photos, so I’m rarely in them, I do occasionally make sure that I get a few photos of me with the kids and we get professional ones done once a year x

Thank you Sara. We take an annual photograph of the family, but we do it ourselves using a camera remote, I hadn’t thought about going to a professional photographer for it.

It is so difficult. I realised I have few photos- especially ones I like- so started with the Me and Mine linky- it’s so much easier with children in the frame.
Well done on getting in front of the camera- truly photos to cherish.
(and Mr J managed to get me a tripod from a car boot for £1 after breaking my previous £5 car boot tripod!).

I haven’t heard of the Me and mine link so I’m going to look into it. Maybe it will motivate me like the sibling one has. We have a tripod already but it is a large one that I can’t be bothered to set up, so I want to get a little one that I can use on top of the table or on a shelf to make it as easy and quick as possible.