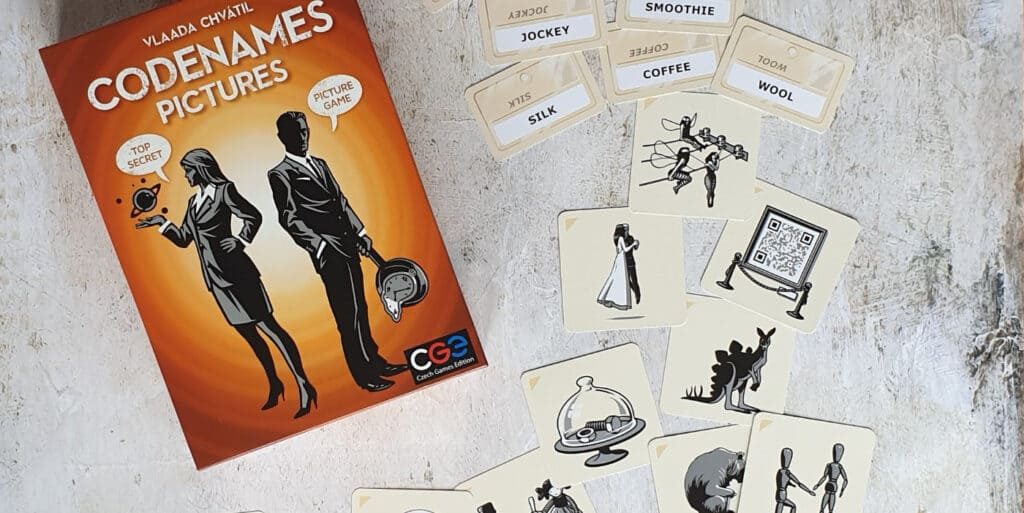 Codenames Pictures* is a team based party game. Where one person from each team gives a one word clue, which their team uses to deduct which picture cards on the table represent their spies. If you have played the original Codenames, this follows the same rules but uses pictures instead of words to depict the spies.

We love Codenames*. And have already played it on more than twenty days this year. We introduced it to friends on a skiing trip earlier this year and by popular demand we played it every night. While we’ve been in lockdown in the UK, we started a weekly virtual Codenames night with up to ten people joining by Zoom.

Everyone loves the original, but after playing it for more than 10 weeks I thought it would be good to try something different. So I was very excited to try Codenames Pictures when Asmodee offered us a copy to review.*

The game comes with sealable plastic bags which makes it easy to store everything in the box. It also makes the game portable as you can take just the bags. Inside the box you get:

The picture cards have jumbled or abstract images so it is possible to make multiple connections between them.

The objective is to find your spies before the other team finds theirs, and to avoid the assassin.

A grid of picture cards is set out five across and four up. Two teams are formed, red and blue, and a spymaster chosen from each. A key card is put in the stand and positioned so only the spymasters can look at it.

The agent, bystander and assassin cards are placed near to the grid. The team that goes first is chosen by the colour on the outside of the keycard. This team is given the double agent card, so they need to find one more agent (the double agent card is red on one side and blue on the other).

The spymasters look at the colours on the keycard and match them to the grid of picture cards to work out which cards represent their spies. They think of words that connect the cards without linking to any other cards in the grid. Each clue must only be one word, followed by the number of cards they want their team to guess.

If the guess is correct they can make another one and if it is incorrect the turn ends. It is not necessary to guess all the numbers as a clue can be used on a future turn, although you can only make one additional guess each turn.

It is then the opposing team’s spymaster’s turn to give a clue. This continues until the end of the game.

We’ve used Zoom to play Codenames and Codenames Pictures remotely. We use Zoom on a laptop to see our friends and join in the conversations. To show the cards we use a mobile phone, connected to Zoom but on mute, looking down at the table. We’ve created a phone holder using a tripod, boom arm and a phone holder my husband had to hold his phone on his drum kit.

Since discovering the game on the ski trip, most of our friends have bought the original Codenames. During lockdown, they’ve also been playing it remotely with family, and have used a variety of methods to hold the phone including brooms and bamboo canes!

We don’t keep score. However, we have a rule that the winning spymaster stays on for the next game. And if you are spymaster for the whole evening, you get great kudos.

Do I recommend it?

Yes, although not necessarily more than the original Codenames. This will depend on how and who you’re playing with. For example, if you’re playing with younger children they could find it easier to link pictures than words. However, playing it over Zoom (the only way we’ve played so far) some of the picture details are lost, which makes it harder to play than the original.

It is certainly nice to have variety using the exact same game play. We’ve played Codenames so many times with the same group of people that the words are getting very familiar, even with the additional cards in Codenames Duet. And I look forward to playing Codenames Pictures in person.

Other games with same mechanism

*Disclaimer – I received this game through the Asmodee Blogger Board Game Club. This was a free game in exchange for an honest review. All comments are my own. This post contains affiliate links which means if you buy something I may earn a percentage of the value. However it does not cost you any more.

Previous Post: « The DIY Guide to Building a Family that Lasts: 12 Tools for Improving Your Home Life
Next Post: Cheering your progress and achievements July 2020 »
Subscribe
Login