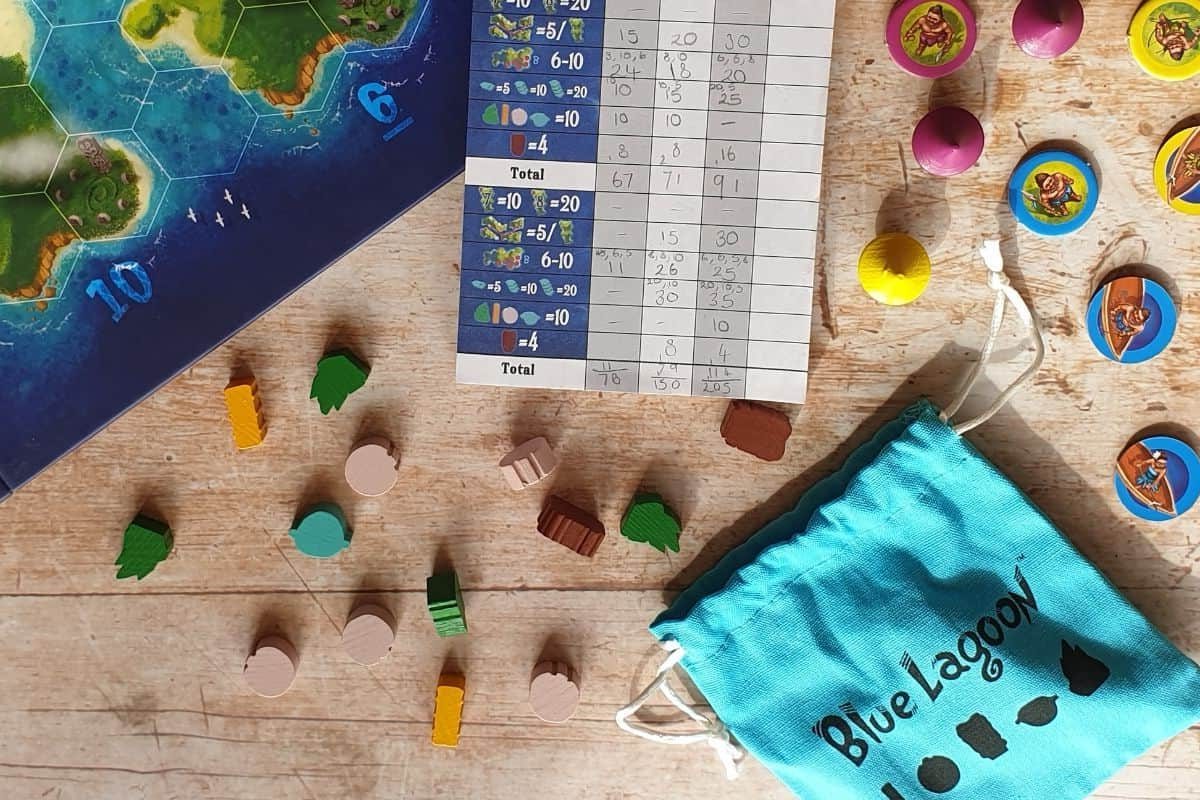 Blue Lagoon* is a board game that works for both children and adults. For children it is simple to learn with quick turns. Yet it has depth for adults due to the different scoring options. Each player explores the archipelago, searching the islands to make new settlements. I didn’t know about the game before we got a free copy to review*. After doing some research I was exctied to try it because it is

Blue Lagoon is an abstract strategy board game. This means the rules don’t simulate reality, each player’s decisions impacts on the game and there is no element of chance such as dice rolling.

The aim is to be the person with the most points at the end of two phases. The game is scored twice, after phase one and then totalled at the end of phase two.

The box says 8+ while the Board Game Geek community suggests 10+. However my 7 year old has enjoyed playing it.

The box says 30-45 minutes which fits our experience. However, I think it could be quicker if everyone knows how to play and stays focused.

The box is brightly coloured with a picture reminiscent of Moana. If you enjoy the film, this could be an accompanying resource highlighting the island hopping. A nice touch is the spot UV printing meaning the central boat appears glossy.

The plastic insert is well designed. It is obvious where each piece goes and the player tokens are neat, meaning it is easy to set up a new game.

Read moreBest Christmas board game for your family

The player tokens are cardboard disks with a land and a water side. With additional wooden huts for each village settlement. The huts have tiny carved doors and roofs to match the player token colour. The huts were a huge hit with the children I’ve played game with.

The resource tokens are wooden, but don’t look like what they represent. However this isn’t important as they are all different colours and shapes so are easy to identify.

I love the fact the pop out cards have a corner cut out to make them easier to remove. This is a thoughtful addition considering you are unlikely to keep the cardboard once you have removed the pieces

How to play Blue Lagoon

The basic mechanism is very simple. On your turn, you place a token, or a village hut, on to the board next to one of your existing pieces, or by starting a new chain. If the token is on the water it shows the boat side and if it is on an island it shows the land side. And if it goes on a stone circle you take the resource or statue on that space.

There are lots of choices in the game as there are different ways to score points. Do you build one long chain across lots of islands, or ittles ones that mean you get resources from each island? You can also see what the other players are doing which may change your strategy. Do you aim to maximise your points do you take actions to stop other people collecting as many points? We found it was easier to get blocked in a game with more players, which led to more resource hunting.

As each turn is playing one tile the game should move quickly and keep people’s interest. Unfortunately, this hasn’t happened yet, but I hope the more we play it the more focused everyone one will be. However, the second phase has always played quicker than the first phase. Interestingly, the instructions suggest not playing this phase on your first play. I disagree because it will help to reinforce the rules and scoring, as they are almost the same as the first phase. Plus, everyone I’ve played with has enjoyed the second phase more because they know what they are doing.

Each phase ends when either the last resource is picked up or the last player token is added to the board. Scoring takes place at the end of each phase, using the provided score pad. There are different ways to score points:

I had a problem with the score pad the first time we played as I thought there should be an extra row. This would enable you to total the two rounds and then sum the totals together. On a later play I realised you get the grand total by adding the individual scores from phase two to the phase one total.

The person with the largest grand total is the winner.

Do I recommend Blue Lagoon Board Game?

Yes, I recommend Blue Lagoon*. I think it will be a great addition to our collection, particularly for those days when we want to play something easy and quick. It also introduces area control and set collection mechanisms which will open up lots of new games to play in the future.

Something needs to change; I need to change something
Next Post: How to keep the holiday feeling when you return to work